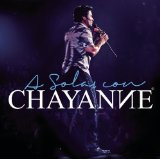 Chayanne achieved gold record status for more than 30,000 copies sold in Mexico from his latest album A Solas Con Chayanne, which was recorded at the National Auditorium during his recent tour, No Hay Imposible.

No Hay Imposible is considered the best and longest running tour for Chayanne, and one of the most important in Latin America, USA and Spain in 2011 and for which he won the Billboard Award for Latin Music in the category Best Live Show.